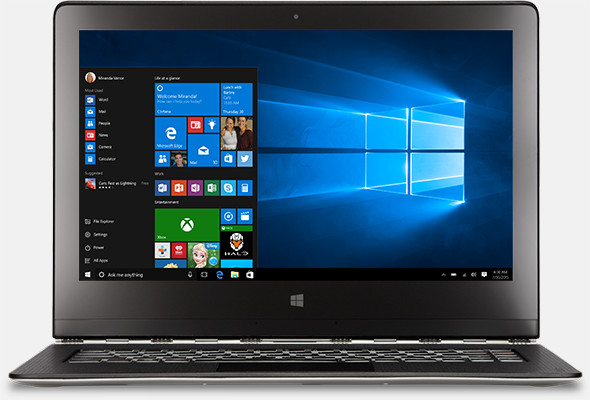 Despite being a satisfied Windows 7 user for a while, I bit and decided to take advantage of Microsoft’s offer of a free upgrade to Windows 10. Although I only upgraded two machines, my experiences may be useful to others contemplating the switch. Of course this does not apply to corporate fleets of PCs where a re-imaging process will no doubt be used. The machines I upgraded were a work machine for my home-based consulting business and a machine used for home entertainment.

The first machine on my network to show up as “ready to upgrade” to Windows 10 was an HP Z400 Workstation with a 2.53GHz Intel Xeon processor, 4 GB of RAM, running the Windows 7 Professional 64-bit operating system. This machine was purchased refurbished from a large, reputable retailer of computers, computer parts and accessories. It came with Windows 7 Professional 64-bit already installed and aside from a slower, cheaper hard drive hardware was all original. It had been running flawlessly for just over a year in its role of everyday office computer for tasks such as email, website maintenance and application development.

The Windows 10 upgrade for this machine was not quite the one-click process described in Microsoft’s marketing copy, but was not all that difficult. Despite almost always leaving the computer on overnight to run automatic updates and virus scans, the Windows 10 upgrade process stopped partway through and informed me that the machine could not be upgraded at this time. After searching a few sources online, I followed a suggestion to run Windows updates manually and try again, which I did – a couple of times eventually. It does, of course, make sense that all updates should be in place before proceeding, but the Windows 10 upgrade process did not identify this issue ahead of time, but rather stopped partway through.

Once it was finally underway for real, the upgrade process took about an hour with multiple restarts. I followed the on-screen suggestion to relax and do something else while the process ran. After the upgrade, all software that was installed before ran fine, although I had to immediately update Kaspersky Internet Security and restart yet again. The Settings screen shows the operating system as Windows 10 Pro.

The second machine to show up as “ready to upgrade” to Windows 10 was a small form factor HP Compac dc5800 with a 2.33 GHz Intel Core Duo processor, 4 GB of RAM, running the Windows 7 Home Premium 32-bit operating system. This machine was also purchased refurbished from the same retailer as the workstation and with the operating system already installed on the original 80 GB HDD. To suit its role as an entertainment machine I had added more RAM, a mid-quality PCI-Express video card with HDMI output, a Hauppauge tuner card, a second 320 GB HDD for storing recorded video and a Logitech wireless touch keyboard. This machine stays permanently connected to our TV and although it is obviously not up to gaming, it functions perfectly well for watching streaming content and cable TV programming.

The Windows 10 upgrade process for this machine was far from straight-forward, despite my attempt at learning from my first upgrade experience and running all updates manually first. After starting the upgrade process and watching it run for a few minutes while it downloaded the necessary files, the process stopped abruptly with the message “windows 10 cannot update system reserved partition”. Another try returned the same result. This sounded like a permissions problem to me at first, which puzzled me since I am administrator on the machine. After searching online I learned it was not a permissions problem but a space problem. Sure enough, Disk Management showed that my system reserved partition was less than 100 MB. Not wanting (actually too lazy) to go the command-line route, I followed the directions at this link and used the method suggested by blog post author Buck Hodges and downloaded and installed MiniTool Partition Wizard Free. The tool’s interface is not the most intuitive and at times had me thinking about going the command line route after all, but I eventually successfully enlarged my system reserved partition. Hodges enlarged his system reserved partition to 300MB. Since I wasn’t concerned about disk space on this machine, I enlarged mine to 650 MB just in case. (Post upgrade, the system reserved partition shows 266 MB of free space).

Full of confidence now, I started the upgrade process again and it got past the previous error message. I walked away and came back an hour later expecting to find the process finished. Instead, it had stopped with a dialog box asking me to acknowledge that I understood that Windows Media Center was not going to be installed. I remembered reading about Windows 10 no longer including Windows Media Center, but I had assumed that since it was already installed it would simply carry over like my other software. It was not to be, but at this point I was not in the mood to turn back and accepted. (More about this later.) When the upgrade on this machine finished, the Settings screen showed the operating system as 32-bit Windows 10 Home on an x64-based system.

Post upgrade, Kaspersky Internet Security refused to update its database and had to be completely removed and reinstalled. Although I did not realize it at the time I made my choice, giving up Windows Media Center was a major loss. I thought that WinTV8, which I was able to obtain free from Hauppauge, would be a worthy replacement but I was wrong. Sorry Hauppauge, but compared to Media Center it sucks. Especially missed from Media Center will be the very handy scheduled recording tool built into the excellent channel guide. I had also forgotten about Media Center’s ability to create ad hoc playlists based on artist or genre from my networked Mp3 collection.

Would I do it again? Of course I would. After making all the post upgrade privacy tweaks necessary to prevent your computer from becoming a smartphone that shouts out your location and web-surfing habits to the world, Windows 10 is a leaner, faster Windows free of see-through dialog boxes and rounded corners on everything. It is what Windows 8 should have been. The upgrade process itself, at least for me, was very flawed. I was an Ubuntu user for many years and Ubuntu’s twice a year upgrade process was like a cleaning at the dentist. The Windows 10 upgrade was like a root canal. Hopefully Microsoft’s promised ongoing update process will be less painful.